The Middle Eastern region refers to a centralized location that spreads between Egypt and the western parts of Asia. The largest ethnic groups in this area include Turks, Azeris, Arabs, Kurds and Persians. There are also a lot of minority ethnic groups, including Armenians, Jews, Greeks, Shabaks and more. The Middle Eastern region has a rich history that originates from ancient times. The region has individuals that are a part of different religions, including Islam, Christianity, Judaism, Mandaeism and much more. The region also has a lot of interesting facts about it, such as the fact that the majority of hamsters that we buy in pet stores today originated from Syria, after a zoologist brought 11 new species of hamsters back with him in 1930. Only two of the hamsters actually bred, and the offspring of these two hamsters were sent to different laboratories throughout the world.

Another interesting fact about the Middle Eastern region is their food choices, recipes and the way they prepare their food. This region features many different original and unique recipes that have been spread throughout the entire world. Today, many countries feature restaurants that specialize in Middle Eastern dishes – and people from all over the world rush to these restaurants to get a taste of these dishes.

One of the most popular foods that originated from the Middle Eastern region is Hummus. Hummus is a dip that originated from Egyptian and Levantine food; it is often used as a spread. Some people refer to hummus as hommus. The original recipe of hummus included mashed chickpeas, combined with salt, garlic, olive oil, lemon juice and tahini. In some cases, the chickpeas can be substituted with other types of beans. Hummus is still very popular in the Middle East, but today it is enjoyed by individuals of other countries as well, including North America and North Africa. This “dip” is considered to be very healthy due to the ingredients that are used to prepare it. The chickpeas, which is the main ingredients found in Hummus, is often considered to be one of the healthiest foods in the world. It contains high-quality protein, slow carbs and a significant amount of fiber.

Tabbouleh is another traditional recipe that originated from the Middle Eastern region. It is a vegetarian dish and often considered to be a salad, but even meat lovers truly enjoy this meal. Tabbouleh traditionally includes a variety of herbs, including bulgur, mint, and parsley. It also contains tomato and onion and is seasoned with salt, lemon juice, and olive oil. In some cases, lettuce and garlic are added. Some people in the region also substitutes bulgur with couscous. Tabbouleh is considered a very healthy dish, an excellent source of protein and fiber. It contains ingredients that have anti-inflammatory properties and it acts as an effective antioxidant.

Baklava isn’t really a dish, but rather a dessert that originated from the Middle East. It comes in a large variety of shapes and has a very sweet taste. The original way to prepare this meal is by stacking layers of pastry and filling the layers with crushed nuts. The crushed nuts are often combined with honey or syrup. This dish has become quite common in the Central region of Asia as well. Even though a limited amount of details are known about the true history of this sweet treat, what is known is the fact that it was first served on the 15th of every month that Ramadan was celebrated, during a ceremony that was known as Baklava Alayi. It is also known that Baklava was originally prepared in Istanbul, inside the Topkapi Palace’s imperial kitchens.

Another sweet treat with a twist from the Middle East. Halvah is shaped similar to a cheese while, but can sometimes also look similar to a layered cake. This isn’t exactly a dessert, but rather a type of candy that is enjoyed in the Middle Eastern region. Today, however, people from all over the world prepare and sell this candy. Originally, Halvah is made from sesame seeds, combined with sugar. There are, however, many variants that include additional flavors in order to make the candy more tasteful. Chocolate and pistachio are two popular flavors of Halvah.

Falafel is another savory dish from the Middle Eastern region. It is believed that Falafel originated from Egypt and then spread north towards the Levant area. It is served as a hot dish and often accompanied by a sauce or side dish. The main ingredients used in falafel is chickpeas and fava beans. Sometimes, it is made with just one of the main ingredients, but it is often also prepared with both. It is common to serve these patties in a pita or flatbread. When it is wrapped in flatbread, it is known as a taboon.

Sabich is often served as an alternative to falafel on pita. It is a complete sandwich that uses eggplant, hummus, tahini and eggs. The Sabich was originally created in Isreal, but soon spread throughout the Middle East and is now prepared as a sandwich in many countries. The sandwich often also contain onion, zhug and potato. The main ingredients of this sandwich are stuffed inside a pita, which serves as a holder. In some cases, the sandwich is also prepared with a sauce, pickles, and Israeli salad.

Mansaf is a dish that is often served in the Middle Eastern region and it is classified as the National Dish of Jordan. The dish has also grown popular in many other countries throughout the world. When served as a small dish, it resembles a pizza with a serving of lamb on top. In some cases, Mansaf can cover an entire table when served as a large dish. There is a wide variety of recipes for this dish, but, originally, Mansaf is a dish that is prepared with lamb, cooked in dried yogurt. It is usually served with bulgur or rice.

Labneh is yogurt cheese recipe that originated from either the Central region of Asia or the Middle East, but it is very popular in the Middle Eastern region. It is also consumed throughout the South Eastern regions of Europe and throughout the entire Asia. Whey is removed from yogurt through a straining process, which results in a thicker consistency yogurt. The yogurt used to prepare Labneh is often made from milk that has added powdered milk or butterfat. In certain regions, such as North American and in Europe, Labneh is often prepared with fat-free yogurt or low-fat yogurt.

Mejadra is a comfort food that also originated from the Middle East and quickly spread throughout the entire world. It combines lentils, onions, and rice into a flavorful dish that people eat as a snack or serve with dinner. Mejadra is often served in cold weather as it is one of the best foods in the region to warm you up from the inside. It is also heavily spiced with cumin, coriander, cinnamon, turmeric and other spices. It is rather easy to make, and many people have created their own versions of Mejadra with some twists to add a different flavor.

Last but not least, let’s not forget about Shawarma. This is a traditional dish that was first made in Middle Eastern countries. The first location a Shawarma was made is Levant, but today we can buy this dish in almost every country – including the United States. The main ingredient of a Shawarma is traditionally lamb meat, but other variants include chicken, veal, buffalo, beef and turkey. Different meats are sometimes combined. The meats are prepared on a spit and covered in plenty of herbs and spices. Many people place Shawarma in a Pita. It is often topped with hummus, amba, pickled turnips and tahini sauce.

There are thousands of different food types, each with its own unique taste, presentation, and ingredients. Each country also has its own original recipes, which are often spread towards other regions of the world. The Middle Eastern region is no different. There are hundreds of different dishes, treats, desserts and comfort foods that originated from this region but is consumed worldwide today. If you are looking for some of the best Middle Eastern restaurants, be sure to search for one close to you. 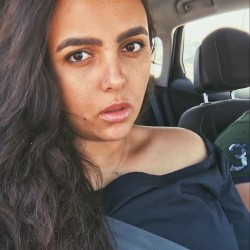 Amna El Tawil
Amna El Tawil is a journalist and a fitness enthusiast who happens to be a total foodie. She believes in leading a healthy life while enjoying the occasional indulgence. When not trying a new restaurant, a new recipe or a new gym class, Amna can probably be found in bed with a book cuddling with her beloved Siberian Husky.