Even the bravest amongst us might be forgiven for quaking at the thought of using chopsticks or attempting spaghetti in distinguished company. A meal out should be a chance to enjoy the good things in life – new flavors, excellent company, and cool surroundings. But it can be hard to pluck up the courage to order lobster for the first time if you can’t tell its uropod from its juicy bits. Have no fear, a guide to eating ‘difficult’ foods is here.

Many Westerners have tried Chinese food, but many Westerners have also chosen the easy way out and used the trusty knife and fork to eat it. If you are about to head East, or just going downtown to your favorite Chinese restaurant, why not throw caution to the wind and take the chopstick challenge?

Chopsticks should be held about two-thirds of the way from the pointed end. It is the upper stick which does all the moving; it is held like a pencil between the thumb and index finger and rests lightly on the middle finger. The lower stick is pressed against the ring finger using the base of the thumb and stays still.
p

Chinese rice is often quite ‘sticky’ so hold the chopsticks at a 45-degree angle to pick up entire clumps. It is perfectly ok to lift the bowl and hold it closer to your body while eating, in order to avoid spillages. When rice has been mastered, you are ready to move on to the next level – noodles – using the same technique.

To avoid offending any of your fellow diners, there are some chopstick no-no’s you need to be aware of. Firstly, wait until your elders begin their meal before you start yours. Never stand your chopsticks in a bowl and do not impale food with them. As you already know it is impolite in the Western world to use your personal cutlery in a communal dish: the same applies to chopsticks, and communal implements will be provided for serving.

So, you know the basics, but if you still need a little convincing, having a  practice at home before dining with the Emperor might be a good idea. Whatever you do, don’t let a fear of getting it wrong stop you giving chopsticks a go.

Knife and fork? Fingers? Neither feels exactly right when eating the perfect Neapolitan pizza, but you’ll never need to feel that way again. Next time you go for pizza, pick up your triangular slice with your fingers but fold the crust edge in half so that all that delicious topping is on the inside. That’s how to eat pizza Italian style. Or if you are hesitant, check out Anthony’s guide in the video below.

There’s a right way to eat spaghetti too, but it takes a little more mastery than the pizza technique. For this dish, you’ll need a fork. First, pick up a few strands of pasta and lift them to separate them from the rest. Next twirl the fork and the strands will wrap around it. The fork can be gently held against the edge of your plate while twirling to stop the strands falling off. Lastly, bring the whole bunch to your mouth to eat. Using a fork to stop the strands falling is acceptable, but not really correct, but cutting the strands up into short lengths with a knife and fork is frowned upon if you are older than five.

How to eat luxurious Lobster?

Lobster is an expensive treat, but worth every penny. It wasn’t always considered a luxury, as it used to be so plentiful, but these days it makes sense to know how to get the best out of a lobster dish before you order one.

Whole lobster is served with a special, two-pronged fork and a set of nutcrackers, as well as a fish knife and fork. Before you get to sample the incredible flavors, there is a little work to do. Begin by picking up the lobster by its back. There are eight legs, and they need to be twisted off close to the body. The long, thin lobster fork is then used to reach the meat from inside the legs.

The claws are next, and these are twisted off in the same way as the legs. Pull the two claws away from each other to break them apart and then use the nutcrackers to break the hard shell somewhere near the base of each claw. Again the specialist fork will allow you to get at the meat inside.

To eat the tail you need to pick up the lobster by its back again and grasp the tail in the opposite hand, Twist the two parts in opposite directions to separate the tail from the body. Take a sharp knife and score down the center of the articulated tail section, then prise the two sides apart. The meat inside can now be scooped out. After cleaning your fingers in the lemon water provided you can dry them on your napkin, and tuck into the meat using the fish knife and fork. Delicious!

Every foodie should try snails (or as the french call them, escargot) at least once in their life. Snails have been eaten all over the world for thousands of years, and are surprisingly nutritious. They contain protein and iron and very few calories if you don’t count the butter they are cooked in, so there’s no need to feel guilty about eating pudding. Now that you’re convinced that ordering escargot is a good idea, you’ll need to know how to eat them.

Like lobster, snails come with their own special utensils. They are usually served in a snail dish, and you will use snail tongs to pick them up. The opening in the shell should be pointing upwards so that the meat inside can be picked out using the two-pronged snail fork. To release the meat from the shell, the prongs of the fork are inserted and then the edge of the shell is used to lever the meat out.

As long as you don’t let them roll around the table, and you remember not to slurp them directly from the shell, eating snails is nothing to be afraid of. 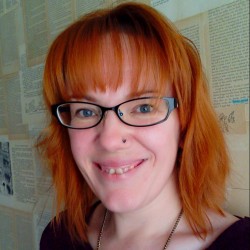 Ali Emerson
Ali Emerson is a writer who loves to help people learn new things. You can learn more about her at aliemerson.com